Newsletters
Basket
Your basket is empty.
My Account
Weather

Weather prevision to enjoy your barbecue without surprises! 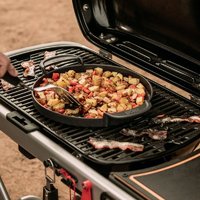 The classic Weber Genesis® gas barbecue was born in 1985. When it was launched, the Genesis® caused a minor revolution on the market and immediately became a classic. It represented an entirely new category of gas barbecue and the success of the Genesis® alone was enough to make Weber the leading supplier of the best quality barbecues on the market. Since then the Genesis® has been the benchmark for all other gas barbecues and is still one of the most popular Weber barbecues.

Display per page
Sort by

The pleasure to cook with a charcoal grill!

Our charcoal grills
Do you find it complicated to use a charcoal grill? With Weber, lighting, controlling and maintaining the embers has never been simpler. If you are among those who cannot imagine a good barbecue without using charcoal, you are in the right place.

Our gas grills
Favorite option for regular grill users, our Weber gas grills emphasize simplicity and speed of use.

Replacement Parts - Coal -Gas
After a while, any grill can benefit from some new parts. Whether you need a new cooking grate, a grill brush head or even if you can't find your own warming grate: Weber has everything you need.